A few weeks ago, I was given the task of fulfilling every 13 (and in some cases 30) year old girls dream, by going backstage at Nottinghams Arena to interview JLS in their dressing room. Being 28 and not so enamoured by boybands as i used to be I tried to take myself back to the 13 year old in me…when i was OBSESSED with Take That! All I wanted from life was to marry Mark Owen. Every night I used to kiss each of my favourite posters. I once threw the worlds biggest crying/hysterical fit when my mean older brothers locked themselves in my room and said they were gonna graffitti Marks face…I didnt speak to them for a week after that…I was so traumatised. I tried to think of way of marrying him. In hindsight…really quite glad that didn’t work out….(i am STILL shocked by his womanising ways…naughty Mark!)
So I wasn’t surprised to turn up and find hoards of teens waiting outside the back of the Arena gates, desperately trying to get a glimpse of the boys. I wanted to smuggle them all in with me as I sensed their frustration that I didnt love them as much as them and didn’t deserve to get past security…I hadn’t even made a banner OR wearing a JLS hoodie?!

The boys were lovely, we sat in their dressing room, amongst purple leather studded outfits (nice!), champage (obviously) and a bowl of fruit. Left to our own devices, no watchful eye from any tour managers, Pr etc, just me, the boys and our producer Jen alone in a room. If this was me and Take That 15 years ago I would’ve definately been asking them to marry me in tears by now. In fact I think I would probably be the same now if given the chance…but this time it would be Barlow….Anywaaaaay!

We had a great chat, found out that Marvin IS back together with Rochelle from the Saturdays…but they’re not moving in toegther yet. JB is dating a dancer, Aston also has a girlfriend, but Oritise is single and on the look out! And rather flirty…. They’re biggest celeb crush is Eva Longoria, they run straight to the hotel after a gig as a decoy to fans and they’ve seen Lily Allens boobs. They claim to not use chat up lines…however they did guess my age at ‘around 18-21’?! Don’t care if that is a line, i’m having that!! 😉 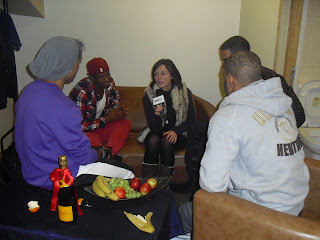 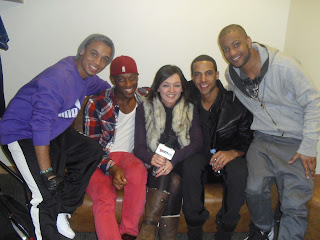