I never thought I’d be attending a ‘World Premiere’ in Leicester, until David Walliams arrived in town for the stage adptation of his kids book, ‘Mr. Stink’! So it was rather exciting to learn I would also get to have a chat with the great man himself at the interval. I have been a big fan of his since ‘Rock Profile’-which, to be honest, to date is still my favourite piece of his work! Not sure that’s what he’d want to hear, but it was BRILLIANT!! If you aren’t familiar with Rock Profile, it was basically Matt Lucas and David Walliams doing ‘interviews’ with Jamie Theakston as pop stars. Basically hilarious impressions. I’m gonna post a video below…(scroll right to the bottom….)

Anywaaaay, thats not what the premiere was about…we were there to see Mr. Stink! I’m a big fan of films that are aimed at kids…but appeal to adults as well. Plus this came with a scratch and sniff notebook which is always good as I have the attention span of a nit so there’s always something to keep you occupied during the singing parts! We arrived at Curve Theatre, which, by the way…is amazing! If you haven’t been to a show yet, you really should just go for a coffee at least, to check out the building. It really does Leicester proud. We sat in the canteen and I saw this tall, lean blonde breeze through…it was David’s supermodel wife, Lara Stone. Woah, she is pretty hot! I’m always amazed at just how long and impressive supermodels are in real life, especially as I’m some what of a dwarf. They are mesmerising! Then she sparked up a fag. Standard supermodel!

This isn’t from last night….but seemed fitting if you weren’t sure what she looked like…. 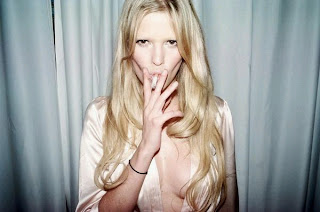 It was lovely to see David sat in the audience and signing autographs before the performance. Then came the interval…and I was instructed I had 3 minutes. THREE MINUTES! We usually get at least 10-15 minutes for interviews-but it was an interval of course, so would be a very brief chat-which is quite as hard as it’s difficult to strike up any kind of rapport. But hey ho, he was lovely, got a few questions in, invited him on a night out and managed to suggest a new title and idea for his next book! It’s all about Moobs…See what you think…I’d buy it… 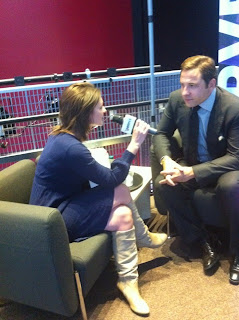 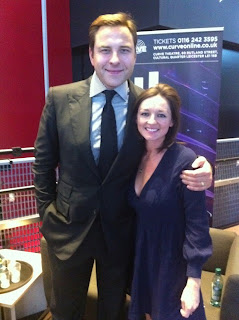 Here’s my fave…Rock Profile!! I reckon Gary Barlow will be just like this on X Factor…