Sooo much to report from New York, New York! Will have to edit but here are the best bits from my first time in the Big Apple…

The trip started rather dramatically…we were flying the day after Boxing Day. Heathrow had only just re-opened after the Xmas snow debarcle over here. So it was with utter dis-belief when I awoke on Boxing Day to be greeted with the headline ‘Severe Snow Blizzard Hits East Coast of US. All Airports Closed’. Nooooooooo! The next 2 days consisted of us glued to the News, waiting to hear our fate! JFK was due to re-open Monday night but would our flight still go?! As we drove to the airport to catch our 6pm flight (which at this point was still scheduled to leave) I was 100 per cent convinced we weren’t going to New York and it would be cancelled. We then hit traffic on the M25. Really HEAVY traffic. It now looked like our flight was in fact going…but we wouldn’t make it due to traffic…what a lovely does of IRONY.

We made it to Heathrow at 5PM, aarrrgh! The flight before ours had just been cancelled…not looking good. Check in told us the flight was overbooked due to all previous cancellations. 100 per cent convinced it was all off now. We were told to wait by a desk with 20 other desperate travellers to see if we could somehow still make that flight or the next. We were duly told ‘a few of you will make this flight…most won’t.’ The flight was still going, we probably weren’t. We started planning a few days away in the Cotswolds instead. Until…after all the drama and uncertainty, we heard our names called out to board the plane!!! 10 minutes before the flight was due to leave!!

So, after checking in…going through security… putting liquids (well my make up) into the little bags…we LEGGED it through departures to the plane. As we boarded I glanced down to the ticket to look at our seats. I couldn’t quite believe my eyes when it said ‘upgrade due to oversales’. We were upgraded to business class!!!!! After all that, our drama had paid off! We walked on…sat in our individual seats..which reclined into a bed….got served a glass of champagne and had the most amazing flight of my life!! It’s fair to say it helped cure my fear of flying. And it was the first flight to leave the UK for New York…amazing. Sooo lucky! Was so comfortable that when we arrived at JFK airport (which had only just re-opened) and couldn’t get off the plane for 4 hours because of snow…i didn’t even care! Good morning New York…. 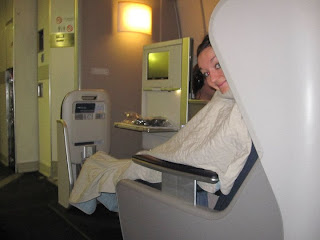 Me in my business class blanket…..I don’t want to fly economy again!! (please can someone fix lottery win for me)

The snow was pretty heavy…hope they had de-icer…. 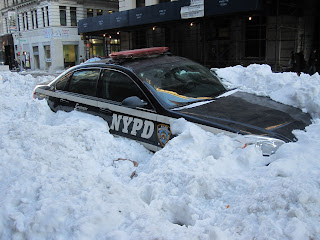