So NYC wasn’t all about getting upgraded on the flight (well…it was for the first day or so…and after i’d texted all my family and friends…) but here are some highlights…and where you should go if you visit!

Our first day consisted of some serious WALKING. Blisters a plenty. But you get to see sooo much that way…Fifth Avenue for shopping-amazing. All the huge designer stores (to look at from outside…) Chanel, Dior, Louis Vuitton etc. Plus the very impressive Trump Towers! 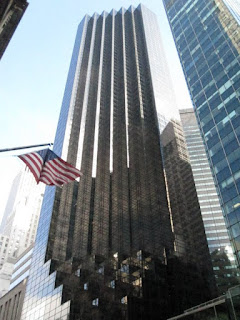 Of course there’s the Empire state…Rockerfellar Centre, Radio City Hall to gaze up at. The skyscrapers are incredible…ended up nose to nose with a few lamp posts as a result! This combined with some serious 3ft deep puddle dodging was tough-the snow was still very much present, and became fun spotting the cars buried in 5ft mounds of powder! We pressed on through the very cool SoHo…amazing little boutique shops and bars/cafes. Where the cool kids hang! We ended the day with an incredible view where we spotted a rather famous landmark at sunset… 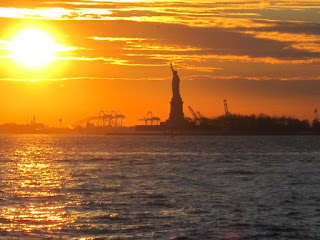 Our best night out was in the Lower East Side-found a gorgeous cosy, hidden restaurant called ‘Freemans’. http://freemansrestaurant.com/ Felt a bit like someones lounge, complete with a bar and stuffed animals on the wall…delicious food! 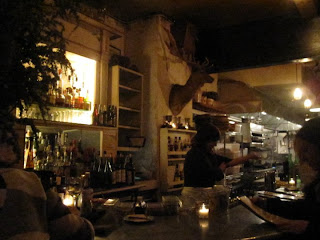 We popped into a bar nearby to try and soak up some more night life. Noticed that all bars have a cpr kit available in the bar and this is advertised. I wonder who is trained to use that kit?! Scary! We asked where was good to go locally and the barman told us 70’s rock legend Patti Smith was playing at the infamous and iconic ‘Bowery Ballroom’. And we managed to get tickets!! Lucky…

She was amazing and we got right to the front!! 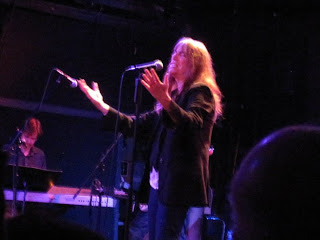 Incredible…ended up making friends who took us to a lesbian club, brilliant!! All in a nights work in New York…

The next day was tough with a hangover but breakfast in a snow filled Central Park helped! 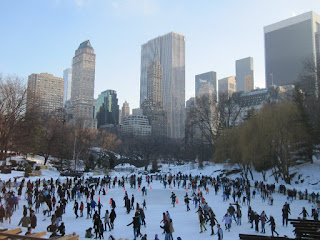 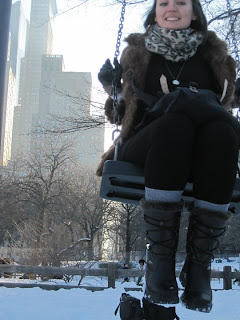 Night before New Years Eve we walked through Times Square-breathtaking all lit up! The whole time walking round, with the NYPD cop cars and Diners feels like i’m on a film set…we then stumbled across American Idol host Ryan Seacrest rehearsing on stage for New Years Eve! *CELEB SPOT* 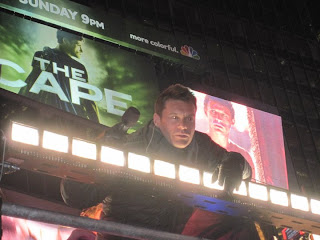 New Years Eve was upon us! We decided not to head to Times Square as we were told you had to hang around for 10 hours in the cold…thats not my idea of fun. So found a rooftop bar called 230 on Fifth which over looks the Empire State building-immense! http://www.230-fifth.com/

I made some more friends as well…(note the snow in pic! And the red robes were handed out to keep us warm on the roof!!) 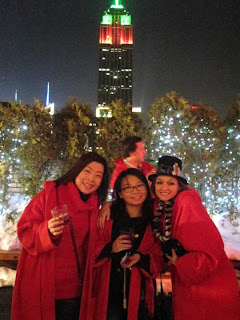 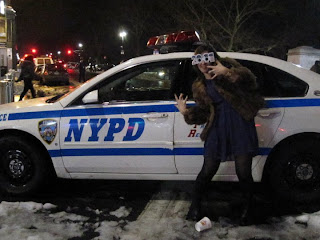 To top the trip off, we headed to Madison Square Gardens to watch the Knicks! Yeah the Knicks rule! Even if you’re not a fan of Basketball (don’t think i’ve ever watched a proper game apart from at school….) it is sooo entertaining. Mainly because they have Time outs every 3 minutes with live entertainment on the court! 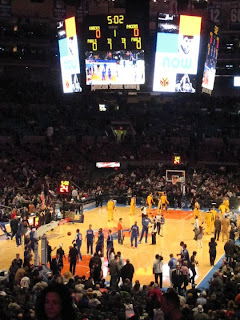 To top the whole week off, we headed to what was by far the most impressive landmark of the week for me….a restaurant called….’avoce’. A restaurant named after me?! How lovely!! Maybe not…but was still very excited by it….(how tragic). If they were to use my name surely I had to sample the culinary delights of avoce? (and pinch a menu and several matchboxes….) 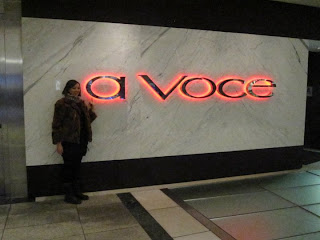