With the end of the Olympics and Paralympics, it’s obvious that it has done nothing but good for the nation. Even your hardened whinger ‘oooh it cost us billions’ can’t deny the fact it’s made a, hopefully lasting impression. And if they don’t think that, they’re either being stubborn or I’m not interested in talking to them anyway as they sound like a right fun sponge.

I’ll be honest, I, like many, wasn’t that excited about the Olympics. Until I saw the opening ceremony. And then, of course, I was hooked. I was even watching table tennis…and actually caring. I won’t need to reiterate how amazing the whole experience was as…well, we all saw it. I mean, I am, of course putting aside George Michaels choice of song and dance moves. But I would like to highlight the importance and actual relief I felt that we had this new breed of grounded, talented, dedicated, passionate, driven role models.

Doing my job, I have to follow celebrity culture. I’m also lucky to meet celebrities sometimes. The term ‘celebrity’ is a bit murky these days isn’t it? I mean, reality stars, WAGS etc. It’s nothing personal against them. Some of them are probably lovely. Yet few are actually entertaining or inspiring. Rare example however-Francis Boulle-Made In Chelsea-I LOVE YOU. Anywaaaay…an actual celebrity in my eyes is someone who is exceptionally talented in their field. Someone you can look to and aspire to be like. Like, when you watch Adele singing, De Niro acting or Kate Moss…umm, walking/looking fit.

The simple point I’m trying to (quite badly make) is just how refreshing it’s been see a nation excited, talking about and inspired by role models who aren’t driven by having at table at Mahiki, or keeps their ‘celebrity’ bubbling by an endless amount of rows/break ups/pointless headlines. Chantelle Houghton-you seem like a sweet girl. But you have a child now, stop it. It’s relentless.

Footballers-Please try and take heed so we can be proud of you when you represent the country. Instead of feeling sheer embarrassment. And not that you’ve all arrived in matching white Range Rovers, fresh from a communal holiday of culture in Dubai, but because you have about as much drive and moral standing as a night out with John Terry, Ashley Cole and Tiger Woods discussing the importance of a moral, family life. In Vegas. With strippers. And Charlie Sheen.

X Factor-I have nothing against the programme idea (apart from the weekend long commitment it demands and Geri Halliwells unbalanced excitement).  It is what it is. It’s just the publicity spin around it. Yawn.
I just found it so uplifting that the nation was supporting something that wasn’t created by Simon Cowell.

Which leads me onto two very exciting moments recently….meeting and interviewing two of our local Olympic heroes! We had gymnast Sam Oldham, local lad and Olympic bronze medallist and Mansfield’s very own swimming champ, Gold and Bronze medallist, Rebecca Adlington in on the show. To meet and chat to them was not only an honour (plus I got to hold the medals!) but each of their takes on their experience as part of the Olympics was fascinating. It felt like meeting actual celebrities. Mainly because I was so in awe of what they’d achieved and what they’d been a part of. They’d been hanging in the Olympic village bumping into Mo Farrah. Had inspiring team talks (or not so in Adlington’s case) from Gold medallist James Cracknall. And managed to order over 200 chicken nuggets from the Olympic village just because they were free. (Good effort Sam. You’d do the same at 19)

Recently we had an 8 year old girl playing our game ‘Small Talk’. When we asked her what she wanted to be when she grew up, she replied ‘Jessica Ennis’. This was so much more refreshing than ‘Katie Price’. Which actually happened. Cripes. 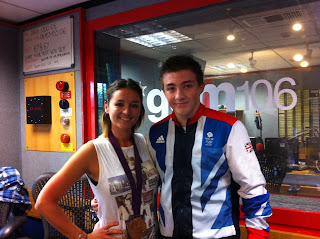 Doing the Mo, with Rebecca Adlington 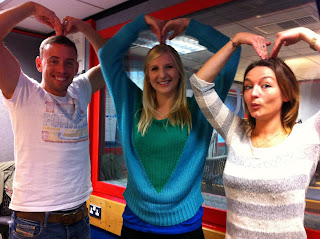 Embarrassing when the Olympic torch is almost longer than you… 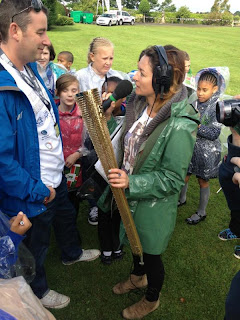