It’s Xmas Eve eve!! After 2 weeks of xmas parties, cheesey festive snowy walks and a daily repetition of Mariah Carey and Chris Rea’s Driving Home for Xmas, I am well and truly ready for xmas!! The build up, by far, really is the best bit for me. Highlight so far was my ‘ultimate twee xmas moment’ and it was totally unintentional. I went down to London to see my boyfriend Ben last weekend during which time the snow blizzard finally hit London. There was obvious pandemonium…so instead of braving the sharpened elbows in the shops we decided to stay put in the flat…which luckily has an open fire…(you know whats coming…)! So that was lit…the snow was falling outside over the beautiful Belsize Park, and I just so happened to have a copy of ‘Its A Wonderful Life’ with me….One of those festive film I’d never seen but had been ordered to by so many people-who seemed, quite frankly, disgusted that i’d never seen it! So it was popped on. Feeling nauseous yet?! It is an amazing film though! The snow, open fire and moral teachings of James Stewart felt…dare I say…magical? Bleuurrgh! Ok, enough of the fromage…lets talk about cheating..

No I don’t mean the John Terry/Mark Owen/Ronan Keating type that we’ve seen WAY too much of this year (what a rat pack….)! I made a slight error this xmas-buying ALL my gifts online. Made sense at the time, but when they arrived yesterday they were either poor quality/not the size you expected/generally rubbish! I had a serious xmas present confidence crisis. But if you’re in the same predicament, fear not as I have a theory!! Lets be honest…seeing your presents under the tree and guessing what they are is the excitement…plus first impressions count SO if you have got average/disappointing presents then put a LOT of effort into the wrapping! Therefore-at least the recipient will be excited before unwrapping! Also..after recieving a really disappointing book I decided to make it more ‘exciting’ by adding my own words/pictures and commentary…which at least makes it personal and slightly more amusing. BONUS! Fingers crossed it works…saying that…I just texted Ben a pic of his presents to cheer him up as he has flu….he texted back saying ‘Are you going to wrap them?’ I was going for a MINIMALIST look!! Haha….Merry Xmas…xxx 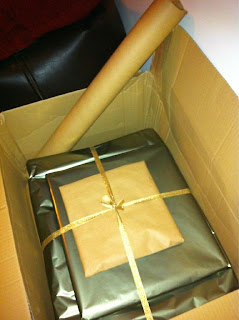